After World War II Douglas had a commanding position in the commercial aircraft market. Boeing had pointed the way to the modern all-metal airliner in 1933 with the 247, but Douglas, more than any other company, made commercial air travel a reality. Douglas produced a succession of piston-engined aircraft (DC-2, DC-3, DC-4, DC-5, DC-6, and DC-7) through the 1930s, 1940s and 1950s.

When de Havilland flew the first jet airliner, the Comet, in 1949, Douglas felt no need to rush into anything new. Their U.S. competitors at Lockheed and Convair felt the same way: that there would be a gradual switch from piston engines to turbines, and that the switch would be to the more fuel-efficient turboprop engines rather than pure jets. All three companies were working on a new generation of piston-engined designs, with an eye to turboprop conversion in the future.

De Havilland’s pioneering Comet entered airline service in 1952. Initially it was a success, but it was grounded after several fatal crashes in 1953 and 1954. The cause of the Comet crashes had nothing to do with jet engines; it was a rapid metal fatigue failure brought on by cycling the high stresses in corners of the near-square windows from pressurizing the cabin to high altitudes and back. The understanding of metal fatigue that the Comet investigation produced would play a vital part in the good safety record of later types like the DC-8.

In 1952 Douglas remained the most successful of the commercial aircraft manufacturers. They had almost 300 orders on hand for the piston-engined DC-6 and its successor, the DC-7, which had yet to fly. The Comet disasters, and the airlines’ subsequent lack of interest in jets, seemed to show the wisdom of their staying with propeller-driven aircraft.

Boeing took the bold step of starting to plan a pure-jet airliner as early as 1949. Boeing’s military arm had gained experience with large, long-range jets through the B-47 Stratojet(first flight 1947) and the B-52 Stratofortress (1952). With thousands of jet bombers on order or in service, Boeing had developed a close relationship with the US Air Force’sStrategic Air Command (SAC). Boeing also supplied the SAC’s refueling aircraft, the piston-engined KC-97 Stratofreighters, but these were too slow and low flying to easily work with the new jet bombers. The B-52, in particular, had to descend from its cruising altitude and then slow almost to stall speed to work with the KC-97.

Believing that a requirement for a jet-powered tanker was a certainty, Boeing started work on a new jet aircraft for this role that could be adapted into an airliner. As an airliner it would have similar seating capacity to the Comet, but its swept wing would give it higher cruising speed and better range. First presented in 1950 as the Model 473-60C, Boeing failed to generate any interest at the airlines. Boeing remained convinced that the project was worthwhile, and decided to press ahead with a prototype, the Boeing 367-80(“Dash-80”). After spending $16 million of their own money on construction, the Dash-80 rolled out on May 15, 1954, and flew the next month. Boeing’s plans became obvious, despite the misleading older model number.

Douglas remained lukewarm about the jet airliner project, but believed that the Air Force tanker contract would go to two companies for two different aircraft, as several USAF transport contracts in the past had done. In May 1954, the USAF circulated its requirement for 800 jet tankers to Boeing, Douglas, Convair, Fairchild, Lockheed, and Martin. Boeing was just two months away from having their prototype in the air. Just four months after issuing the tanker requirement, the USAF ordered the first 29 KC-135s from Boeing. Besides Boeing’s ability to provide a jet tanker promptly, the flying-boom air-to-air refueling system was also a Boeing product from the KC-97: developing the KC-135 had been a safe bet.

Donald Douglas was shocked by the rapidity of the decision which, he said, had been made before the competing companies even had time to complete their bids. He protested to Washington, but without success. Having started on the DC-8 project, Douglas decided that it was better to press on than give up. Consultations with the airlines resulted in a number of changes: the fuselage was widened by 15 inches (38 cm) to allow six-abreast seating. This led to larger wings and tail surfaces and a longer fuselage.

The DC-8 was announced in July 1955. Four versions were offered to begin with, all with the same 150-foot-6-inch (45.87 m) long airframe with a 141-foot-1-inch (43.00 m) wingspan, but varying in engines and fuel capacity, and with maximum weights of about 120–130 tons (109–118 tonnes). Douglas steadfastly refused to offer different fuselage sizes. The maiden flight was planned for December 1957, with entry into revenue service in 1959. Well aware that they were lagging behind Boeing, Douglas began a major push to market the product. 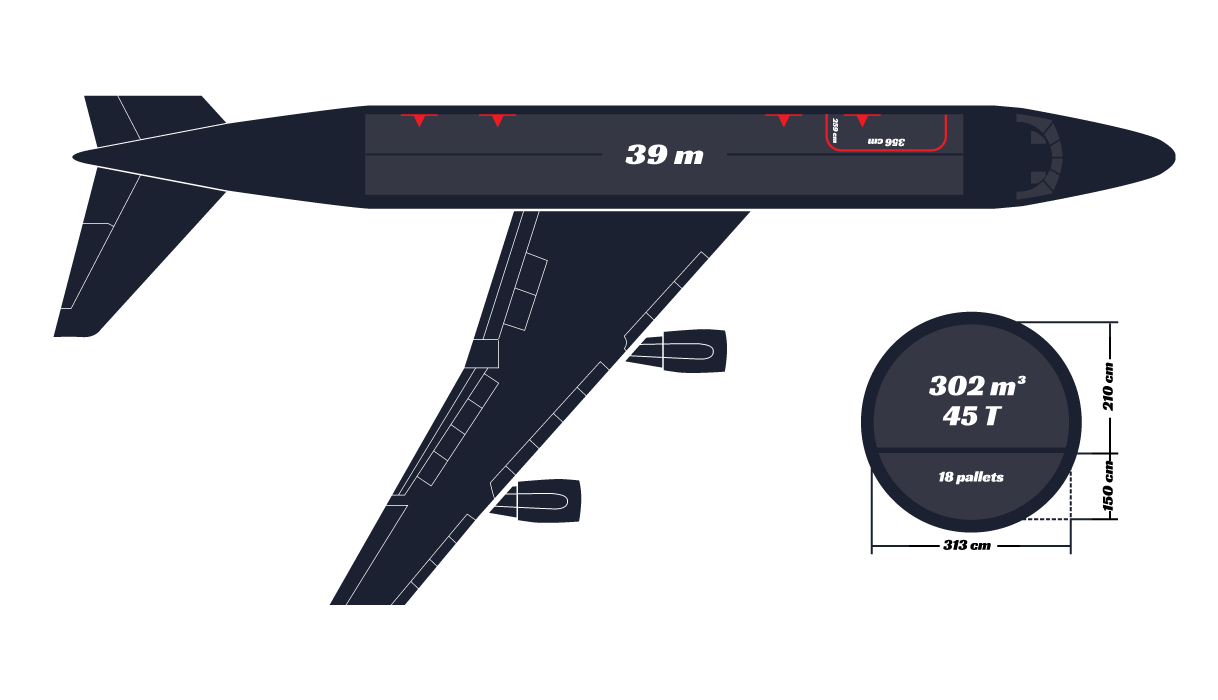