The Gulfstream III was built at Savannah, Georgia in the United States and was designed as an improved variant of theGrumman Gulfstream II. Design studies were performed by Grumman Aerospace Corporation in collaboration withGulfstream American Corporation. Design of the Gulfstream III started with an effort to synthesize a completely new wing employing NASA supercritical airfoil sections and winglets. Optimization studies considering weight, drag, fuel volume, cost, and performance indicated that a substantial portion of the new wing benefit could be secured with modifications to the existing wing. As a result, the new wing concept was canceled and work began on design modifications that would retain the Gulfstream II wing box structure and trailing edge surfaces. The inboard wing was extended in chord and recontoured, to reduce the aircraft’s high-speed drag. The wing span was increased by six feet and five-foot winglets were added. In addition, the fuselage was lengthened by an additional two-foot section aft of the main door and the radome was extended and re-contoured. A new curved windscreen was incorporated, changes were made to the cockpit instruments and autopilot and the maximum take-off weight was increased. The aircraft received type approval from the American Federal Aviation Administration in September 1980. 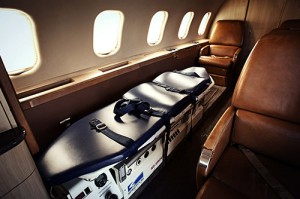 In 2013, the FAA modified 14 CFR part 91 rules to prohibit the operation of jets weighing 75,000 pounds or less that are not stage 3 noise compliant after December 31, 2015. The Gulfstream III is listed explicitly in Federal Register 78 FR 39576. Any Gulfstream III’s that have not been modified by installing Stage 3 noise compliant engines or have not had “hushkits” installed for non-compliant engines will not be permitted to fly in the contiguous 48 states after December 31, 2015. 14 CFR §91.883 Special flight authorizations for jet airplanes weighing 75,000 pounds or less – lists special flight authorizations that may be granted for operation after December 31, 2015.