The Learjet Model 35 and Model 36 are a series of American multi-role business jets and military transport aircraft manufactured by Learjet. When used by the United States Air Force they carry the designation C-21A.

The aircraft are powered by two Garrett TFE731-2 turbofan engines. Its cabin can be arranged for 6-8 passengers. The longer-range Model 36 has a shortened passenger area to provide more space in the aft fuselage for fuel tanks.

The engines are mounted in nacelles on the sides of the aft fuselage. The wings are equipped with single-slotted flaps. The wingtip fuel tanks distinguish the design from other aircraft having similar functions.

The original Model 35 was powered by two TFE731-2-2A engines and was 13 inches longer than its predecessor, the Model 25. First flight of the prototype Model 35 was on 22 August 1973, and the aircraft was FAA certified in July, 1974. It could carry up to eight passengers. There were 64 base-model 35s built. 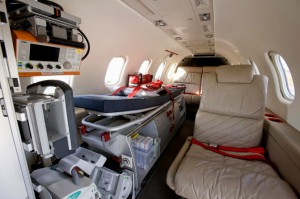 On February 12, 1996, a Learjet 35A piloted by Mark E. Calkins, Charles Conrad, Jr., Paul Thayer, and Daniel Miller completed an around-the-world flight in record time. The record remains standing as of 2011. This aircraft is now on display in Terminal C of Denver International Airport.